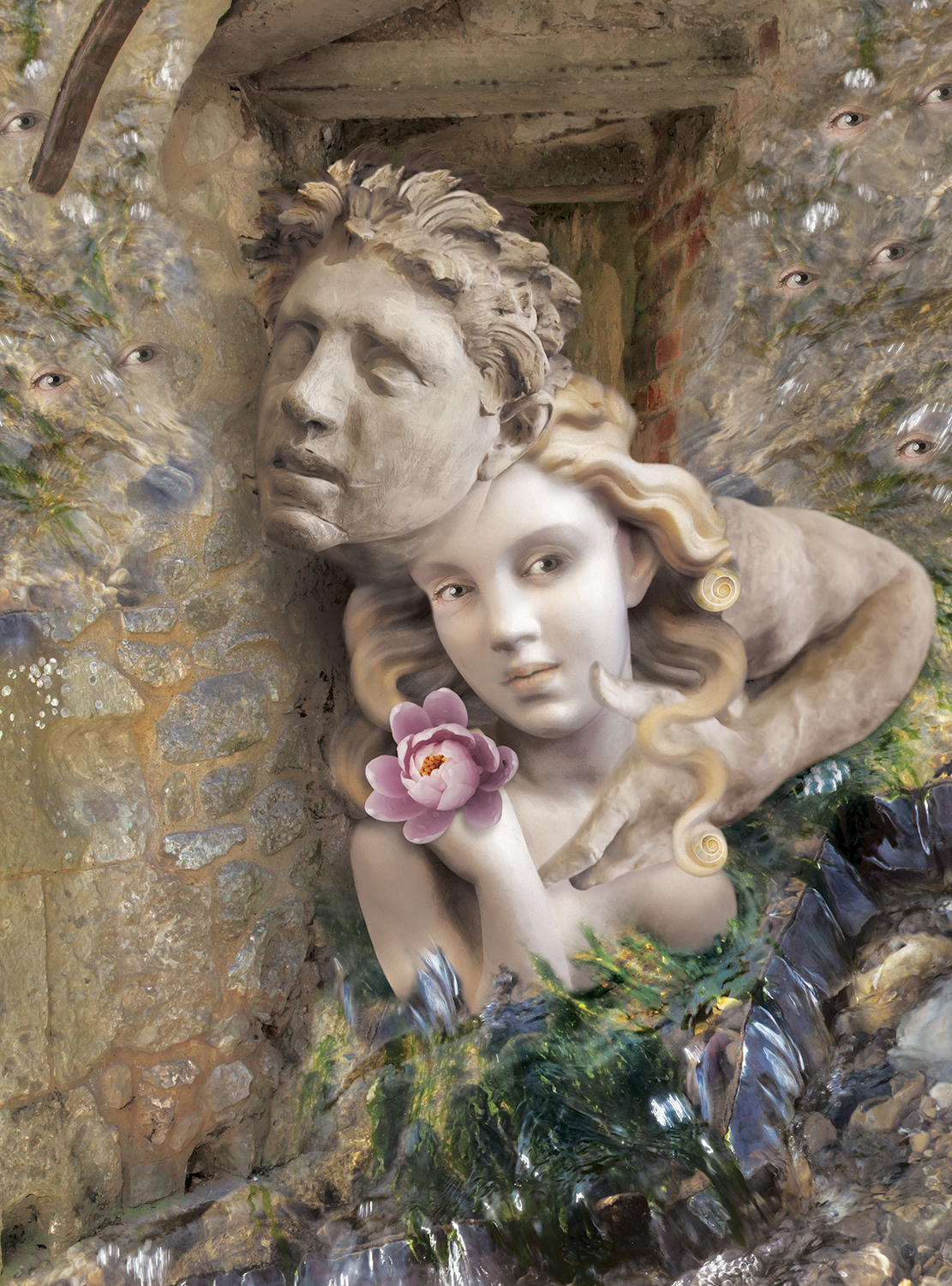 Squeeze life from brick and stone.

Weave past and present memories.

Leaving an imprint of twisted fate.

Words Whispered from Behind.

Sunday 18 June 2017. An intense week of play on the Isle of Wight off England’s south coast has barely begun. A six-month game, ‘The Archaeology of Hope’, has produced an exhibition of objects excavated from the future, and is about to climax in a night of ritual on the summer solstice. On this Sunday afternoon, though, eleven of the Surrealists gathered here from Europe and North America set off in search of a haunted house.

The day is hotter than any of us realised. The walk is further than most of us expected. Only one person has even a rough idea where we are going. We walk the route of an old railway line, graffiti leering at us from the undergrowth. We seek clues in atopoi, shade in amber, jewelled creatures in horse dung. After a couple of hours we arrive at Appuldurcombe House.

Seen from the front, Appuldurcombe is a typical English stately home, an 18th-century country mansion set in ornamental gardens, its elegant windows glittering in the sun. Seen from the back, it’s a storybook ruin. Our first glimpse of it is from behind. A visitor information panel at the entrance tells a tale of passions and posteriors. In 1781 Lady Worsley, the mistress of Appuldurcombe House, eloped with her lover, George Bisset. Her husband, Sir Richard Worsley, took Bisset to court, accusing the pair of adultery. Lady Worsley retorted that her husband had been more than complicit in the affair. Sensational evidence was given that Sir Richard had once encouraged Bisset to stand on his shoulders and peer through a bathhouse window to admire Lady Worsley’s beautiful naked bottom. Sir Richard’s career and reputation were instantly destroyed. The splendidly shameless lady went on to live as a demi-mondaine, taking more lovers as she pleased.

It’s a seemingly abrupt transition from 18th-century scandal to contemporary ruin. The gap is hard to explain. The passage of time, owners and functions; perhaps a few untimely deaths. During the Second World War a German bomber caused significant damage to Appuldurcombe, sealing its fate as a ruin. Still, we are unaware of any critical events that could have contributed to the undeniable atmosphere of sudden vacuity we all notice. Inside out, and enigmatic when observed from behind… Only some allegedly haunted places will be convincing in broad daylight: it requires the conveyance of a density of possibilities and history. Here we fall silent in recognition, yet we start to wonder if we might always need to bring our own traumatic artefacts and cultish secrets to bury in the garden. Is that what the atmosphere calls for? A facade profuse with mossy corners, gaping squares for windows, perfect for hushed glances and unexpected appearances…

Once the finest house on the island, Appuldurcombe is now reputedly its most haunted site. Phantom carriages, ghostly monks, whirling dancers and weeping children prowl the invisible halls, or so locals say. Particularly sensitive visitors report an uncomfortable feeling of being watched – albeit with a significant lack of spooky anecdotes. Ever-hopeful archaeologists, we are ready to communicate with whatever might be waiting. Who’s there? It’s behind you…

Janice visited Isle of Wight England to participate in The Archaeology of Hope exhibition and Surrealist Summer Solstice performance. While there she and a group of surrealist friends hiked to Appuldurcombe House – the ruin of a large 18th-century baroque house. After the hike the Athens Surrealist Group email invitation was shared with the group. The idea of a group submission was formed and participants wrote poetry and made art works based on their experience at Appuldurcombe House. The submission was called Words Whispered from Behind.

Words Whispered from Behind was also an appendix to The Archaeology of Hope catalogue. The color catalogue documents the installation of the exhibition and each art work as well as photographs of the Surrealist Summer Solstice.

The Archaeology of Hope catalogue is available on Lulu.