By janicehathaway Conversation No Comments

When I was completing my MFA in Printmaking and Photography at the University of Alabama in Tuscaloosa Alabama in the 1970s, my instructor’s were predominately male. I was also an active participant in the Raudelunas, TransMuseq and Glass Veal scene in Tuscaloosa at that time. Although there were other women participants including LaDonna Smith and Anne LeBaron, the majority were male. Due to this male influence, my work did not reflect who I was as a woman. This was the South in the 1970 and the women’s movement was a dream. After graduation I worked for several years without sharing my art with anyone. This isolation allowed me to reflect on who I was as an artist and begin to work from a female perspective. That early awareness is embodied in my 2019 work Awakening.

The process I used to create Awakening has taken many years to develop. After I finished graduate school, I wanted to be able to continue working as a printmaker but did not have access to a stone lithography press or a stone. As a substitute I began to make large prints of my photography and to hand-color them to simulate my lithography. I became bored with just having a single image and began to cut the prints to make photographic collage. I continued with this process until I moved to Hawaii in 1998 where I no longer had access to a home photography studio. While in Hawaii I began to teach early graphic software on the computer and as the software and equipment became more advanced, I was gradually able to develop a process that was similar to my hand-colored photo-collage and my early lithography.

I am committed to only working with my own photography. Awakening was created in Photoshop from a studio photograph of a model, several photographs of tulips to create the lush foreground and a sky for a background. The blending of the figure into the sky and the soft edges around her fingertips were made by adding a mask to the figure and by using an airbrush tool by hand to soften the edge of the mask. 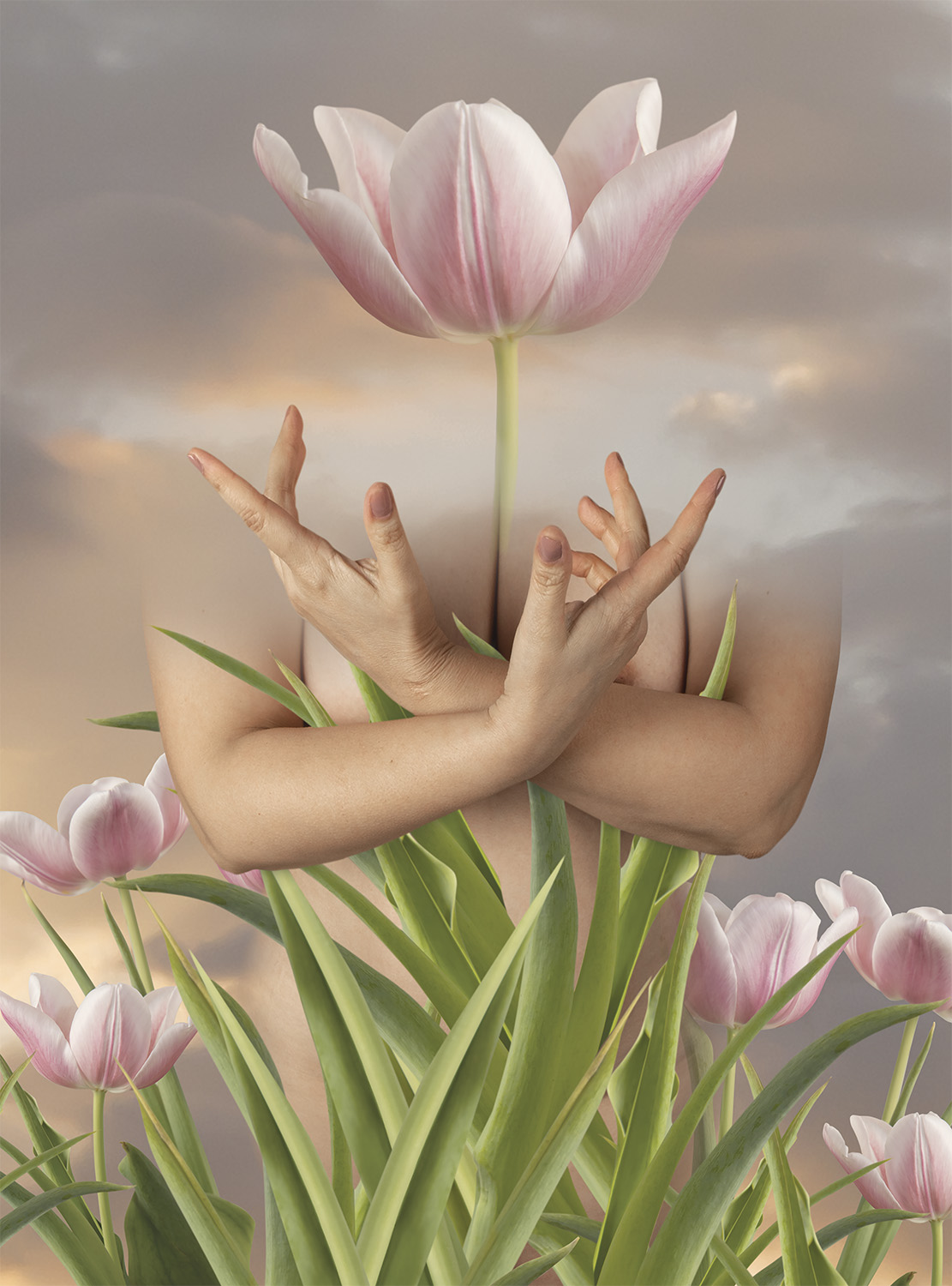 By janicehathaway Conversation, Uncategorized No Comments

The piece Invitation was a response to a surrealist journal 2017 Peculiar Mormyrid 6 Call for the Nocturnal.

The concept was to show our deepest, darkest desires “when you step out under the stars.” The works were published anonymously so that we would submit work without being concerned what others would think. My response was the piece Invitation in which I portrayed sensuality and sexuality. 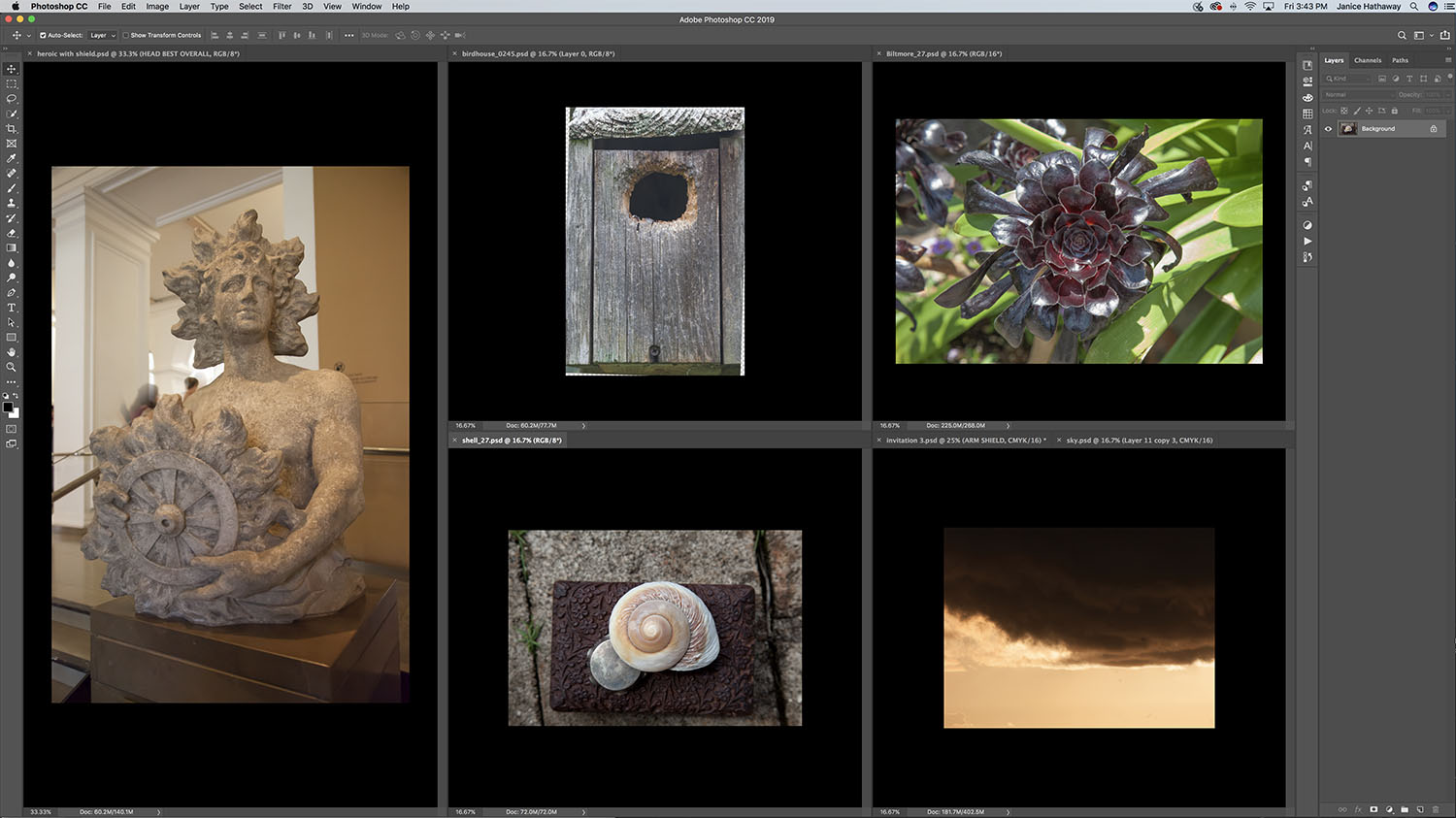 I began with the male figure photographed in 2016 at the Victoria and Albert Museum. I replaced the center of the shield with the opening to an old birdhouse to create a dark center. I echoed the shape of the shield with repeating pieces of a dark red flower I found at Biltmore Estate in Asheville North Carolina to give it depth and color.

At this point it did not seem complete. I decide to give it a luscious appearance by hand-painting water dripping from the center. To complete Invitation I added the spiral shell motif to give it a high-energy spinning quality. In addition to sensuality and sexuality, my goal was to create a piece that shows the universal life balance of yin and yang. 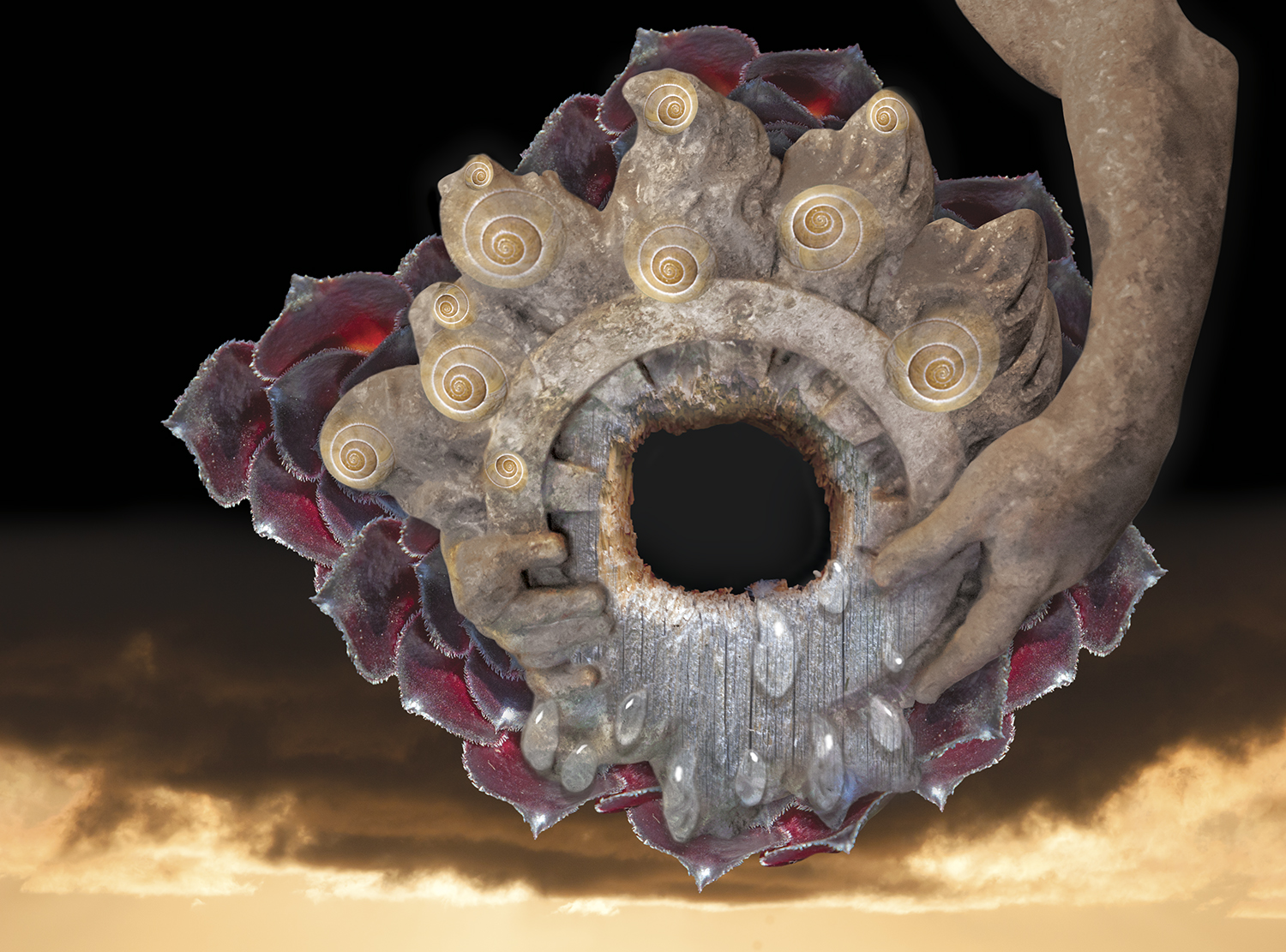 By janicehathaway Conversation No Comments

I love working with color found a good opportunity to do so with the piece Invitation that has a bright orange acting as the sun. This was my response the 2019 Peculiar Mormryid 8 As Above, So Below: Surrealism and the Weather,

Initially I had no idea how to response concept “Is surrealism able to thrive as a weathervane” during this period of global warming and “adapting to new and shifting climates?” I recalled a photograph I had taken years earlier of a sliced orange sitting in icy snow and thought it might be a good place to start. I blended the snow above the orange into a cheerful bright blue sky. 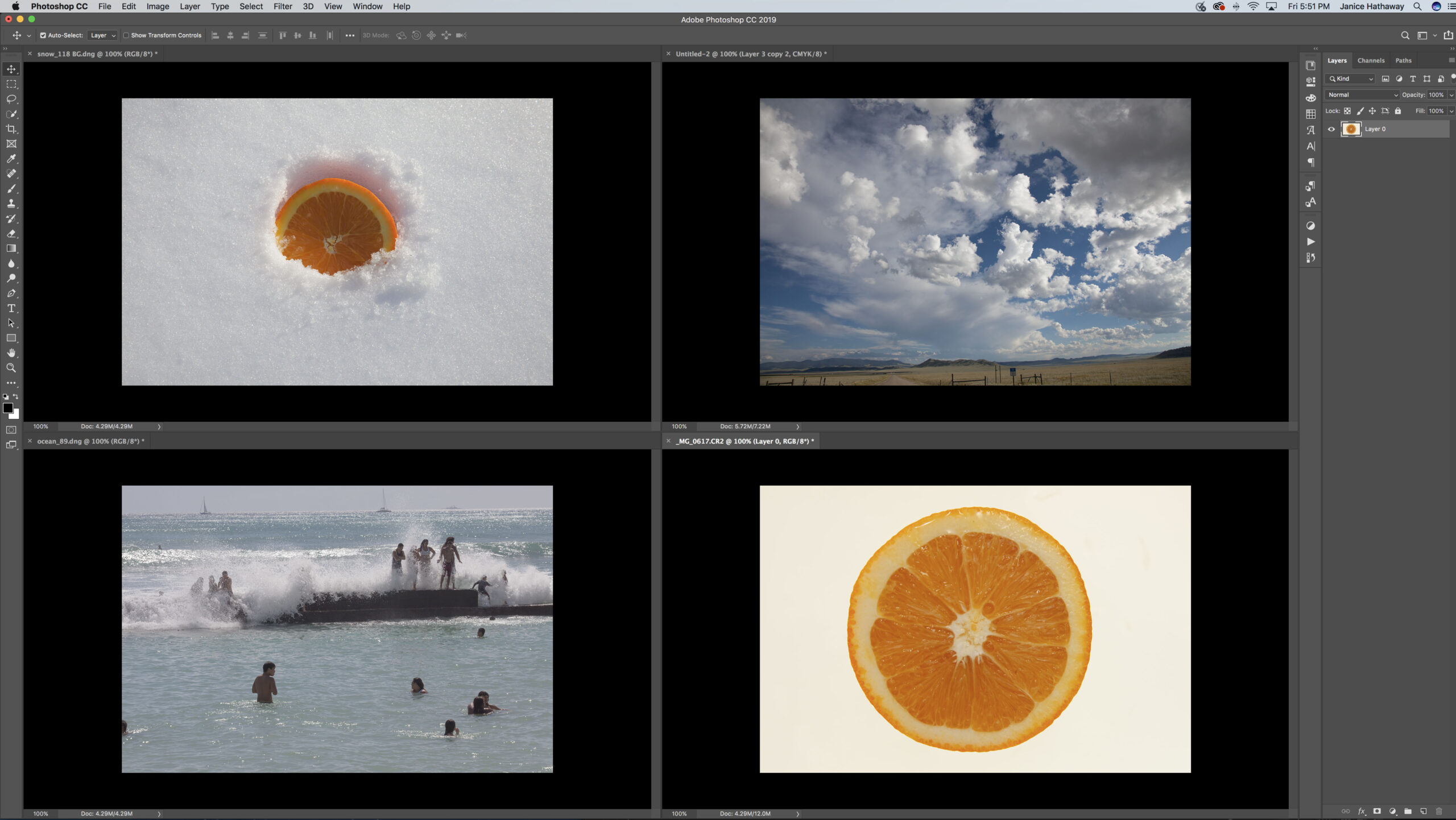 The bottom was empty and I felt that there needed to be a human element added since the theme was about the response to global warming and the impact on civilization. While looking through my archive I found a photograph of people standing on The Waikiki “Wall”  – an eight-foot tall pier-like structure that parallels the beach. Large waves were splashing into the back of the people giving the photograph a bright sparkling quality that reminded me of the snow.  I pieced together parts of a photograph to create the row of people along the bottom edge. After I was finished I thought the orange was too dark and lacked detail. I set up studio lights and photographed a new orange that included water drops to make it glisten. I cut out the new orange and used a mask to replace the original orange sitting in the snow.

Creating these pieces require reflection as the concepts gradually unfold. The additions, revision and refinements are closely related to my early work as a printmaker and typically take around two to three months to complete. 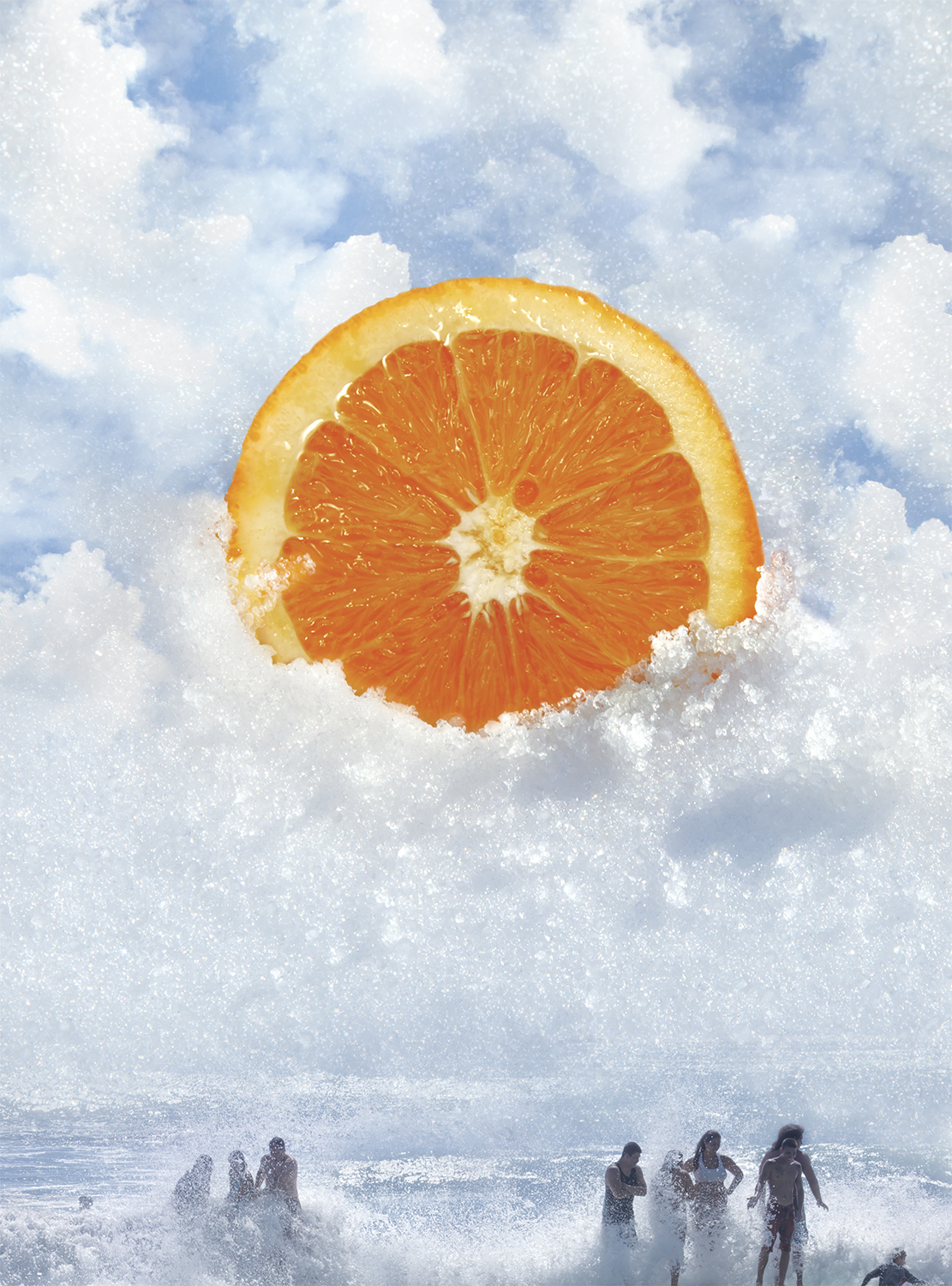